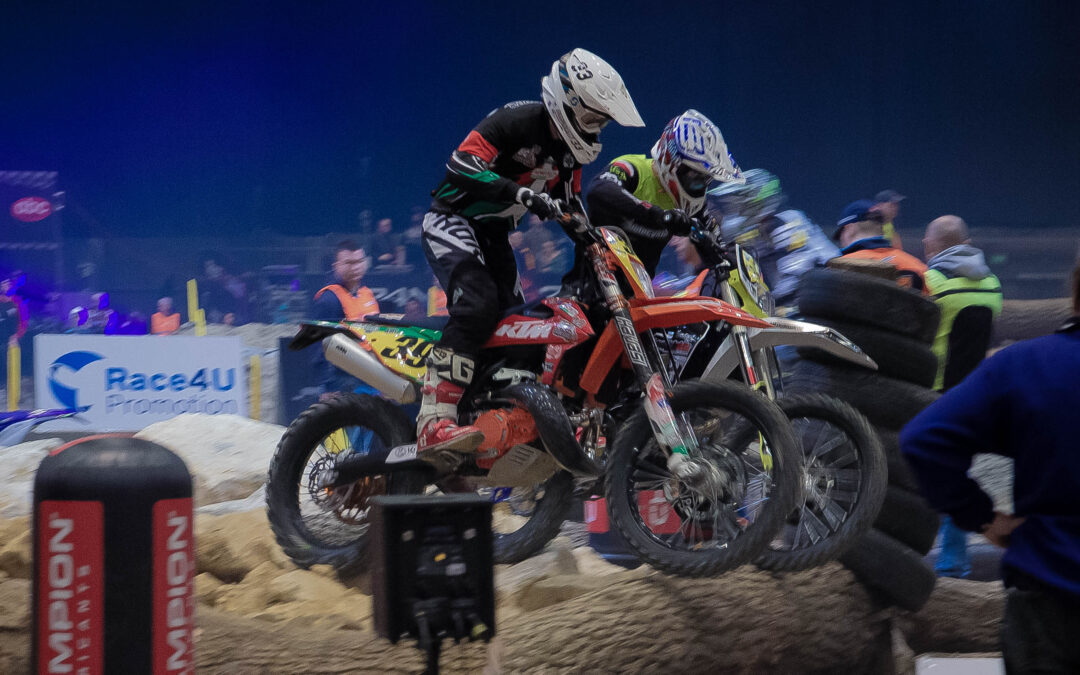 Following the EnduroGP season, which brought unprecedented sporting success, the Enduro Team Hungary riders prepare for the SuperEnduro GP series, which will be held in stadiums and will include shorter races. Open 4S World Cup runner-up Norbert Zsigovits will compete in the Junior category, while Márk Szőke will be looking to prove himself in the European Cup.

The next season of the SuperEnduro GP series is about to get underway with Enduro Team Hungary’s Norbert Zsigovits and Márk Szőke returning into the fields. The Hungarian riders will compete in Łódź (Poland), Budapest (Hungary) and two rounds in Riesa (Germany). Norbert Zsigovits, who has won World Cup races and finished 2nd overall during the Enduro GP season, will switch categories and join the Junior category field on a two-stroke KTM EXC 300. 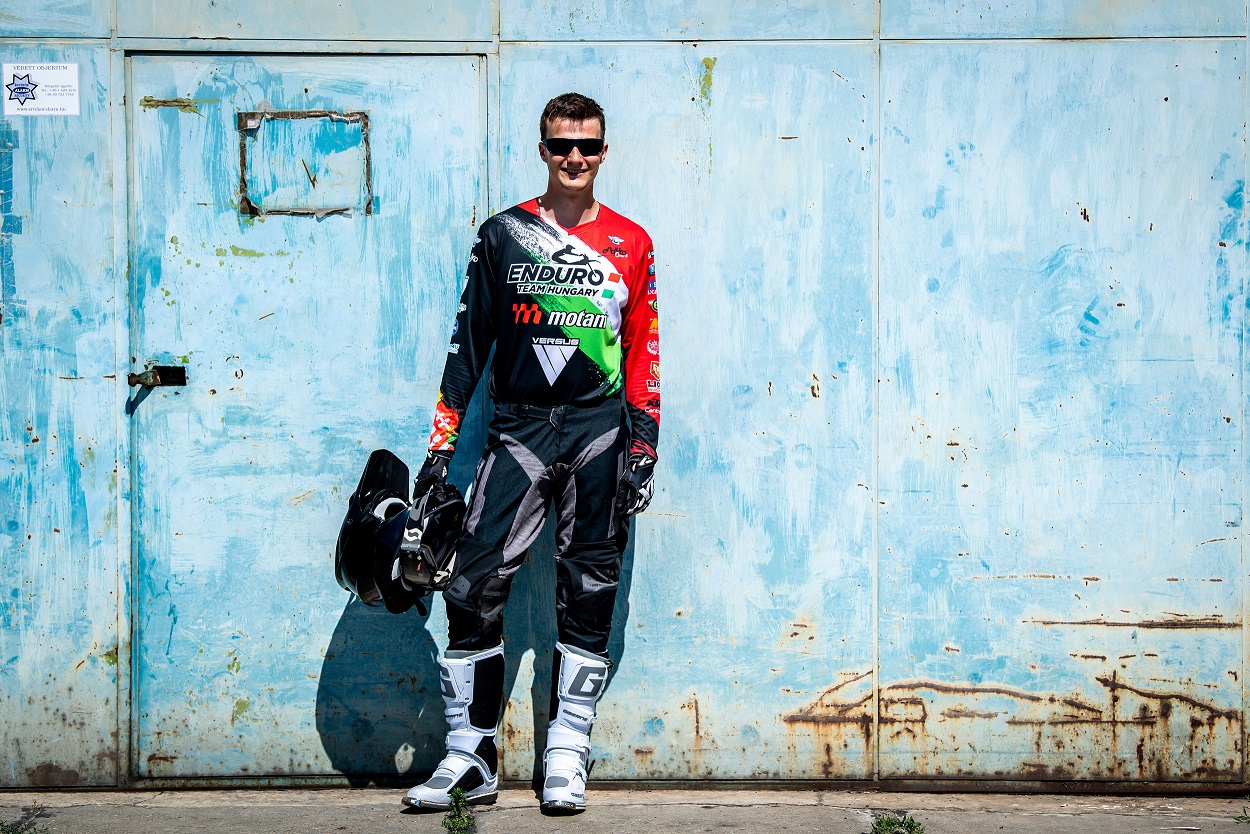 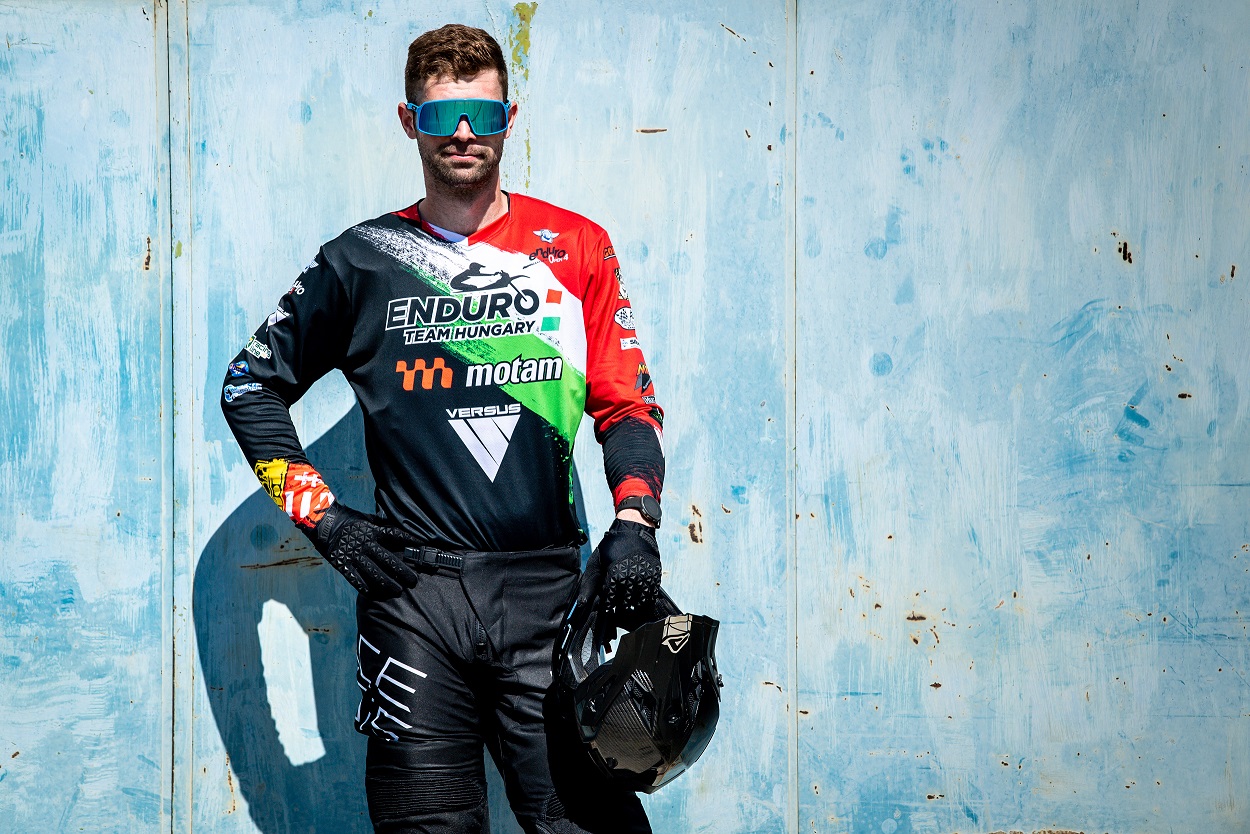 His teammate, Márk Szőke, who finished 2nd in two World Cup races, will continue to ride a two-stroke Sherco SE 300 Racing and compete in the European Cup where last time Norbert Zsigovits claimed victory in one of the final races of the highly successful Hungarian SuperEnduro GP round in front of a crowd of 8,000 spectators.

A different challenge to the classic enduro

Compared to classic enduro racing, SuperEnduro GP rounds are typically one-day events, with riders competing in three categories in short races of a few minutes, usually in indoor stadia. The sport is essentially a combination of enduro, motocross and trial racing, with practice sessions held against the clock and races where the riders compete against each other. 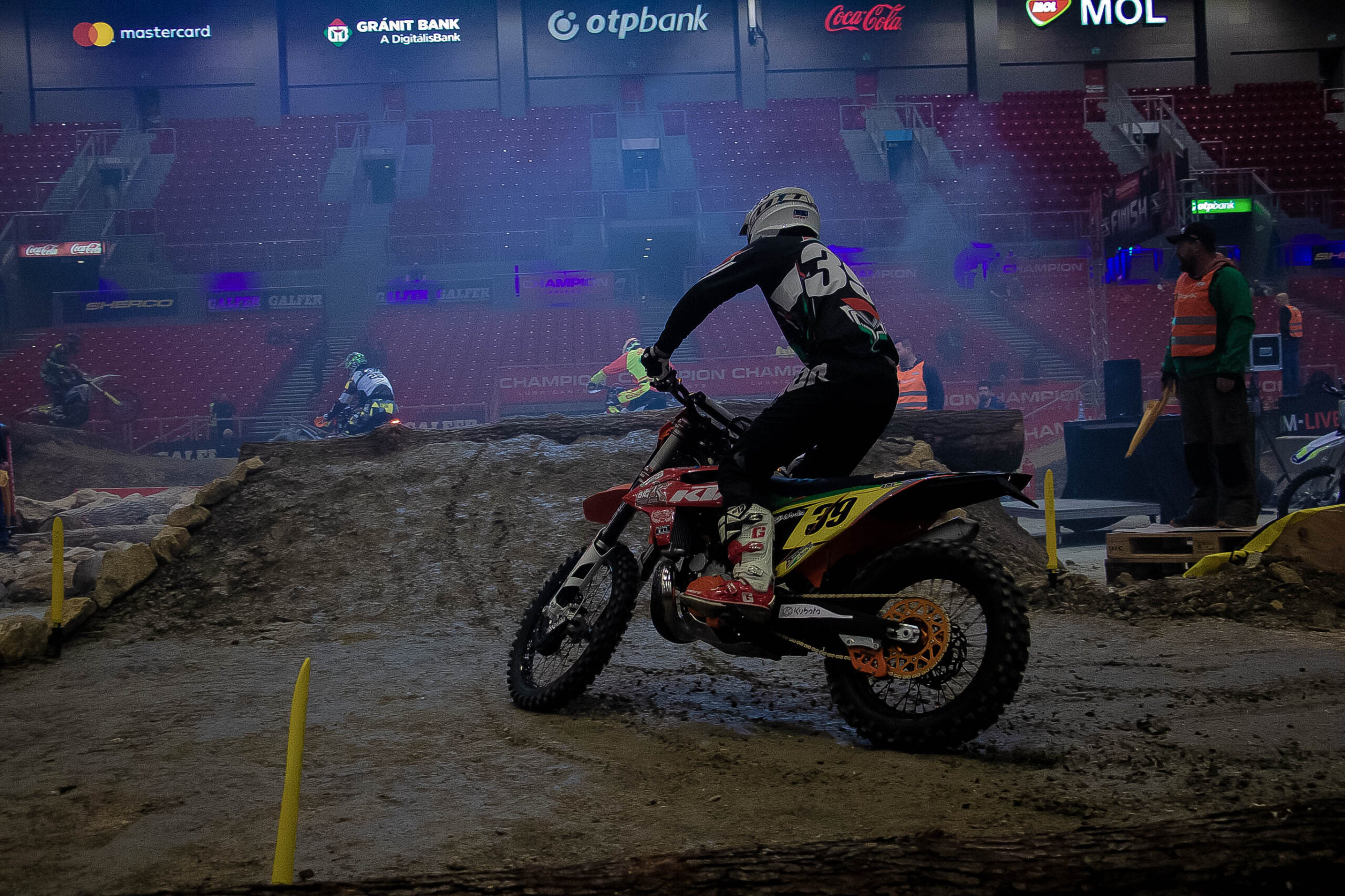 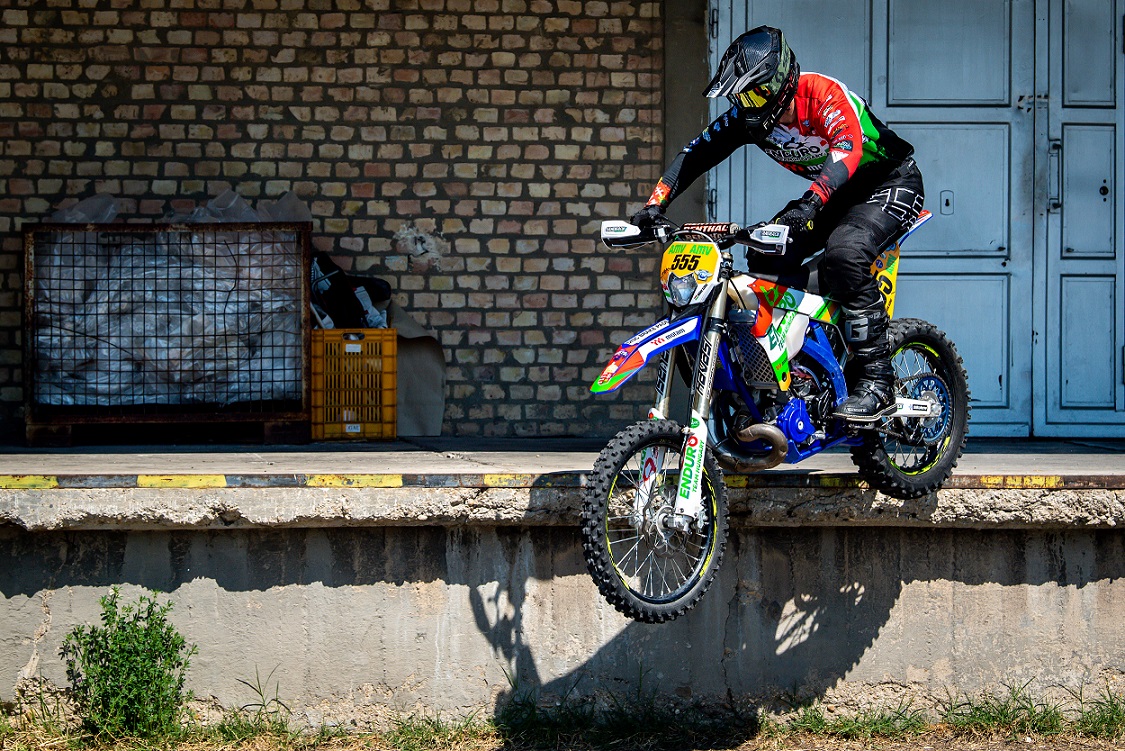 The tracks feature various challenges, some resemble enduro racing, typically with wooden and rocky obstacles, some motocross elements such as jumps, wave lines or sharp corners, and some trial skill elements, including taller structures that riders have to jump on.

The Junior category will also see a big fight, with Norbert Zsigovits, who has already tried his luck in this category, but most recently competed in the European Cup, where this year Márk Szőke will represent Enduro Team Hungary. In addition, there will also be support races and a special event for children. 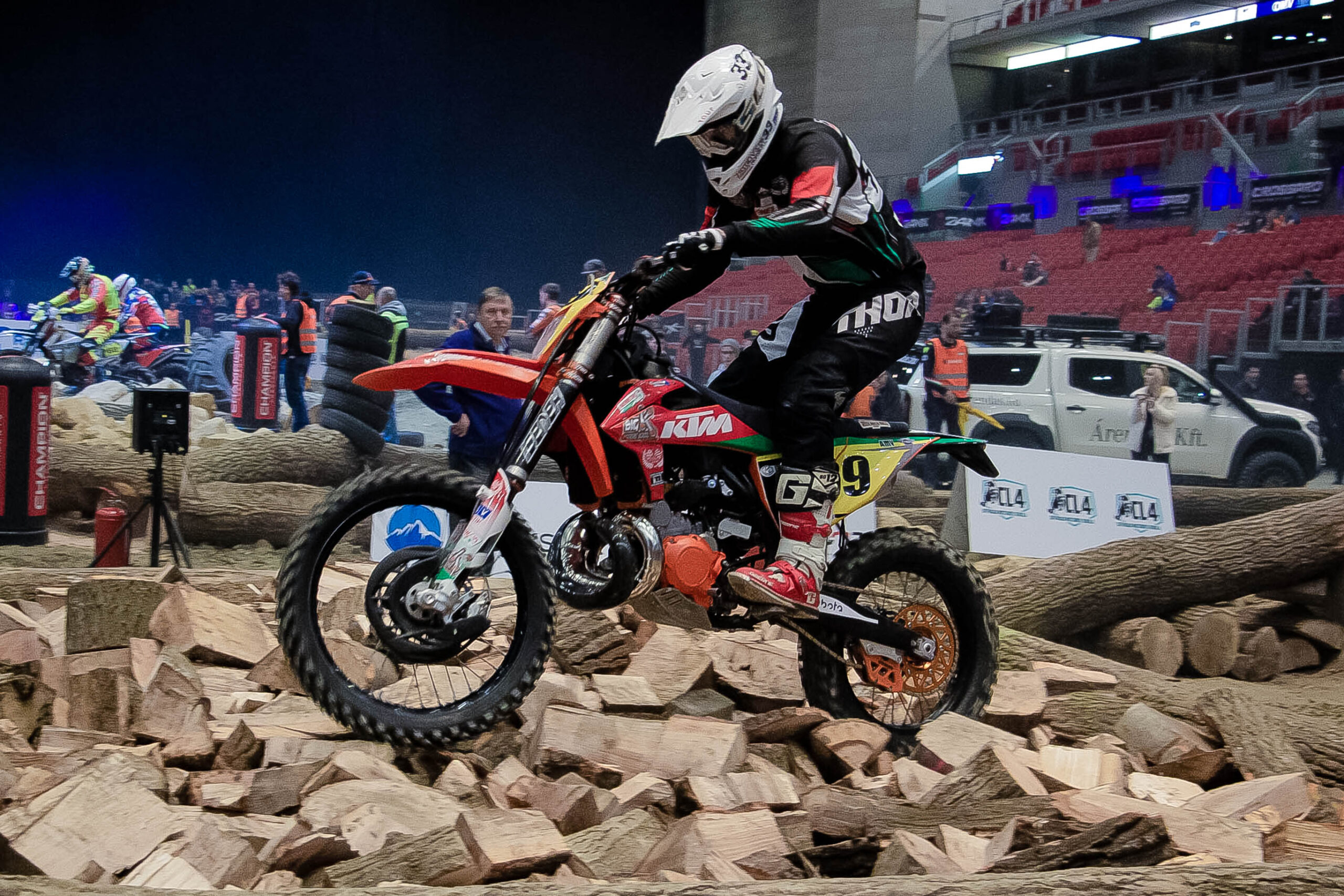 “Instead of the four-stroke engine, I will ride a two-stroke bike, which I used to race on the SuperEnduro because it’s lighter and easier to handle. I’ve raced in the Junior category before, but last time I raced in the European Cup because of the limited training opportunities, and now I’m curious to see what I can do in Junior. I prefer the SuperEnduro, it’s much more exciting and technical than a regular enduro race. It’s more compact and has everything you’d find in a longer race. The close combat is not so much in my favour, but that’s part of the game in this form of racing,” said Norbert Zsigovits ahead of the season opener.

“It’s the last year I can compete in the Junior category, so I want to get a good result. I’m more experienced in terms of preparation. Every year I have to switch from enduro racing to the shorter format. We took advantage of the fact that the weather was good, so we were able to prepare well and I did what I could.”

His teammate Márk Szőke, who comes from the world of motocross, is also in favour of the SuperEnduro GP format, even if the postponement of the German round to March will make it difficult for him to get back into the classic enduro racing. 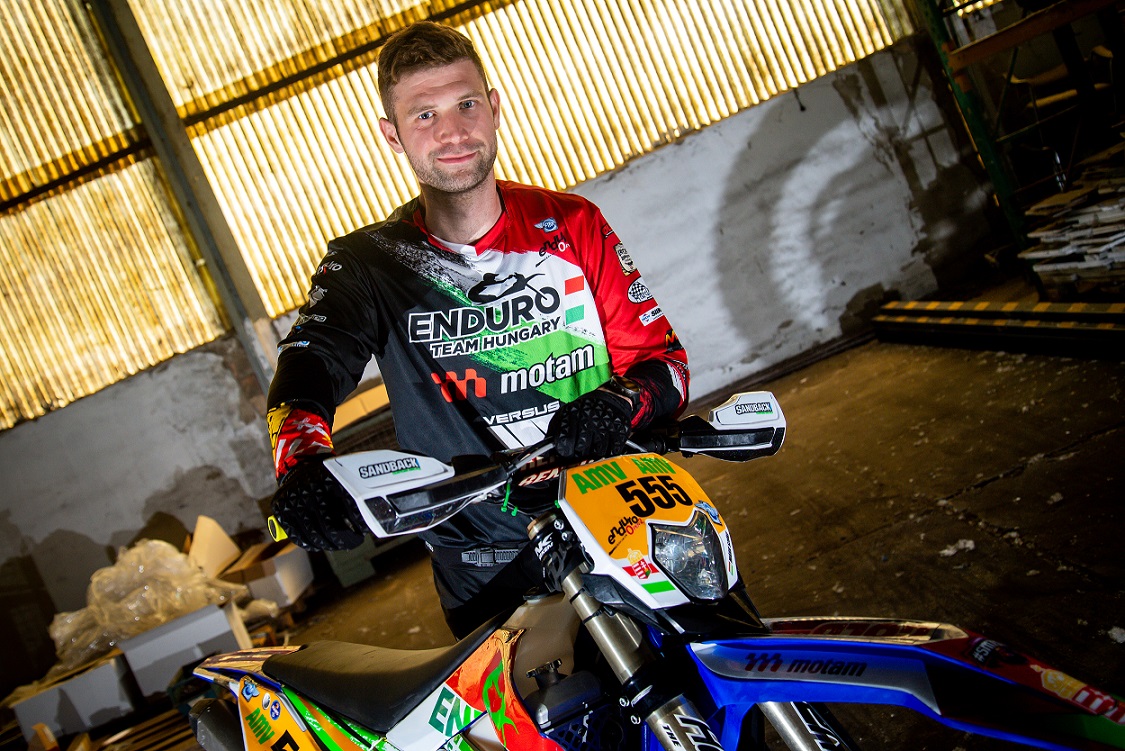 “We’ll be racing in close combat, which reminds me of motocross, I prefer it when I’m not just riding alone but there are several of us on the track. This will be the second international race of my life of this kind, and my third in the world of SuperEnduro. At first it was very strange, and I even retired due to an engine failure, but since then I’ve learned this form of racing.”

“The Open World Cup is like long distance running while SuperEnduro GP is more like a sprint. There are short races, the pressure is intense, there is no time to make up mistakes, and therefore it is much more difficult. I would definitely like to get a podium finish, but the main goal is to do well in qualifying and then I’ll know what to do.”

It will be a challenge for the Hungarian riders that they may not necessarily know their rivals from EnduroGP weekends. Ádám Hadobás, Team Principal of Enduro Team Hungary and promoter of the Hungarian SuperEnduro GP round, pointed out that there are some opponents who compete in both disciplines, but the top riders usually come from the Hard Enduro field or from trial racing.

“Norbert Zsigovits is competing in a tough category, the Juniors, and looking at the entry list, we would be very happy with a top 5 result. Márk Szőke competed in Budapest for the first time in the SuperEnduro GP, as a motocross rider he didn’t really know what to expect, but this year he could prepare in a much more focused way,” he said.

“He finished with an outstanding result in the Supertest in Portugal, and that track is the most similar to the SuperEnduro. Both of them have completed almost a full EnduroGP season, with Friday’s Supertests taking place on similar type of tracks.”

A spectacular challenge for the riders, entertainment for the fans

During the rounds, the competition will start with free practice after administration and scrutineering. The schedule features a time trial and a qualifying race, from which the top 14 riders will advance straight through to the final, with two more qualifying in the last chance heat. In each category, the second race will be held with a reverse grid, with the slowest driver being the first to choose a grid position. The starting grid typically consists of 7 plus 1 driver, with drivers starting from two rows. The races are short, lasting 8-9 minutes, with the first-place finisher’s last lap determining how many laps will be completed.

The way the Prestige category is run is slightly different, with the world’s top 8 riders going straight through to the final regardless of their qualifying times. In addition, the local organiser has the possibility to grant a wildcard entry to a competitor. The remaining 4-5 places will go to the qualifiers. Before the Prestige Final, a Superpole will be organised for the top 8 riders, with the laps being completed in reverse order of the results. This is similar to the previous Formula One qualifying system, where a warm-up lap is followed by a timed lap. The top three finishers in Superpole are awarded championship bonus points at a ratio of 3-2-1. The winners of the races in each of the three categories will score 20 points, giving a total of 60 points for the day, with the reverse grid race deciding the order in the event of a tie.

The field will return to Budapest in February

On the 5th of February 2022, the SuperEnduro GP field will take to the track at the Budapest Arena, where the audience will be treated with a showcase of exciting races and spectacular performances, including dancers, pyrotechnics, jugglers, motorcycle shows and other acts.

“Unfortunately, the Hungarian race will not be the season finale due to the pandemic as the German races have had to be rescheduled for March. In preparation, we have to build the track from scratch in two days, which, like the Israeli venue, was designed by Kornél Németh. He is the most successful Hungarian rider in the history of this sport and knows all about what a good SuperEnduro track looks like. With 60 truckloads of earth, 2-3 truckloads of stones and wood to transport to the site, it’s a monumental task. Several machines will be working non-stop on the track and a lot of volunteers will be helping to make the event happen,” said Ádám Hadobás, promoter of the SuperEnduro GP round in Budapest.