Geri Rácz achieved his goal, finishing as the second best rookie in the MINI CHALLENGE 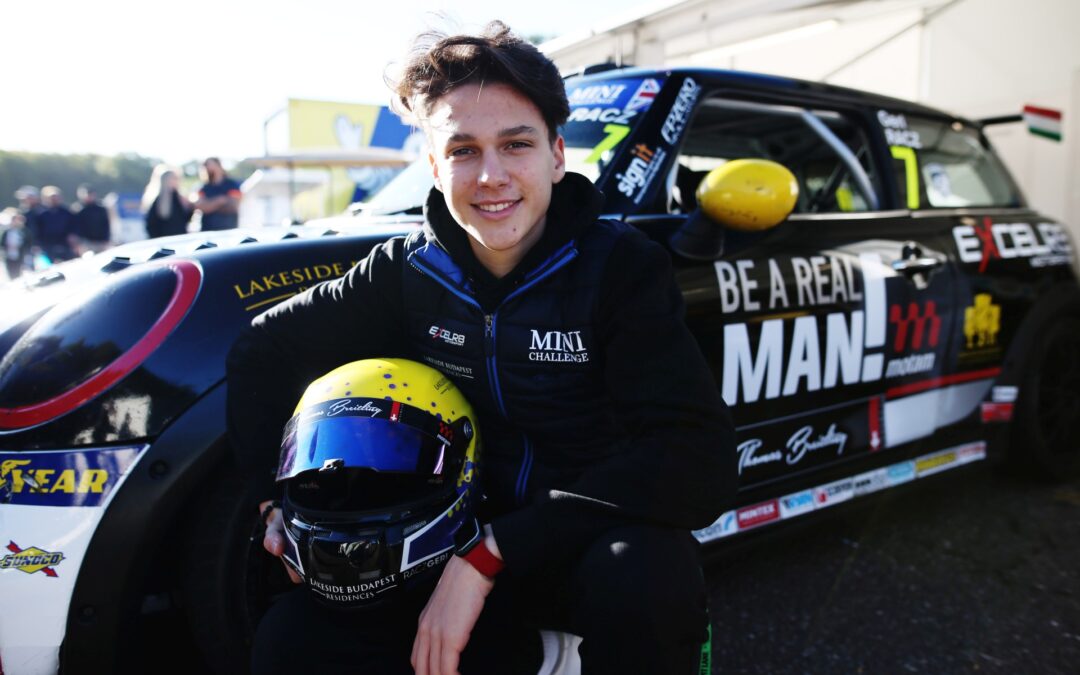 Geri Rácz has had one of his toughest race weekends ever in the MINI CHALLENGE JCW. The 16-year-old EXCELR8 Motorsport driver took to the grid at Brand Hatch in the series’ season finale this year, and his ordeal began in Friday’s second free practice session and continued in qualifying and the races. But there were still some positives to take from the HUMDA-backed athlete’s final appearance of the year.

Geri Rácz travelled to the last weekend of the MINI CHALLENGE JCW this year with the aim of retaining second place in the rookie classification. And the EXCELR8 Motorsport driver met that target, finishing second in the 11-rookie classification behind Alex Denning, who had already secured the championship title at Silverstone. He also managed to improve one place in the overall standings, finishing the year in 11th place out of 30 drivers.

As for the longer, Grand Prix-track weekend at Brands Hatch, unlike the spring round, the Hungarian driver was unlucky on Friday, as he had to end the second free practice session early due to a suspension problem, and was unable to complete any real fast laps.

Just like in qualifying the next day, during which he skidded on the wet curve of the drying track and crashed his car on the wet grass. ’Friday’s mistake was annoying in terms of having a good lap and not being able to take full advantage of the time available. But Grand Prix driving is much more enjoyable live than it was in the simulator, so there were some pleasant surprises. On Saturday, qualifying didn’t go as I had planned. I tried to map out the grip on the lead-out lap and quickly found the grip limit, but on my first fast lap I was thrown by a bump and slipped, so I couldn’t do any more laps.’

For a long time it was questionable whether Geri would be able to take part in the first race of the weekend, but the team worked hard to make last-minute improvements, so the #7 MINI started the 20-minute first race from last place, climbing from 26th to 19th, but as the race was red flagged, the result of the last completed lap counted, so Geri was ranked 21st. He started Saturday’s second race from this position and again managed to move up to 16th.

’The first thing I would like to say about Saturday is that it was really good that the team cared so much about me after the accident. Of course I felt bad about my slip, but it meant a lot that everyone worked as one on my car and did everything they could to make sure I didn’t have to miss a race. It was a real team effort, and I thank them for that.’ 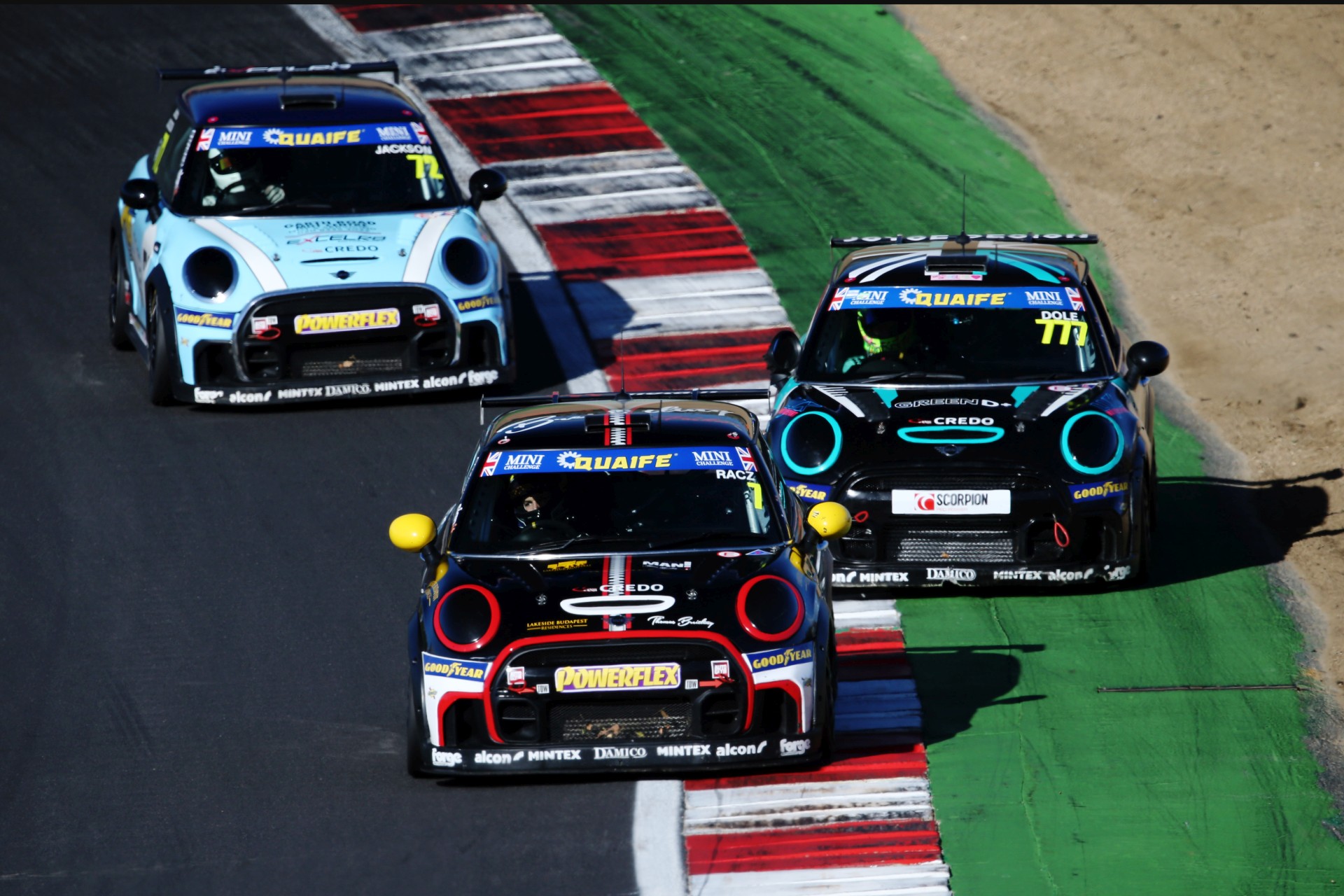 ’As for the races on Saturday, in the second race the car behaved very strangely, it felt slow and lacked stability. But what I can say positively about the first day of the race is that I did a lot of battling and there was a hair-raising situation in the first race that I managed to get out of. The driver in front of me clipped the grass with his right rear wheel and crossed in front of me. I had to brake hard and I still only missed him by ten centimetres. If I had failed, I would have had a huge accident. There was also a lot of action at the start of the second race, after the start a driver spun around in the Druids corner, so I had to go around a bit there too, and then I managed a very daring overtake at the end of the race.’

There was only one race left for the MINI CHALLENGE field on Sunday, with Geri starting from 16th and finishing 17th after visiting the gravel bed at the end of the first lap.

’I got the best start of the whole weekend in the third race, so I managed to at least keep my starting position, but the rear of the car got away in the last corner, so I slid over the gravel bed and lost a good number of positions. The safety car was sent in straight away after that, which didn’t help as we were behind it for quite a long time and I was running out of time to catch up. At the end of the race I had some big battles, sometimes four of us were racing alongside each other on the straight, but a few minutes before the end of the race the safety car came again and then they red flagged the race and I didn’t manage to get any further ahead. However, I still had some interesting duels at the back of the track, where the asphalt was not as grippy as it was around the finish line. The track is constantly narrowing here, and if you get to the outer curve, you quickly run out of road. This happened several times to the rider I was fighting with.’

So Geri Rácz has had a tough weekend, which also marked the end of her season. ’I am happy that I managed to finish second in the rookie classification. I came to the MINI CHALLENGE at the beginning of the year not knowing any of the tracks or the car, but I have improved a lot during the season and I feel that my pace has helped me to become a top ten driver. I would like to take this opportunity to thank everyone who has cheered me on this year and those who have helped and supported me. Thanks also go to my parents, EXCELR8 Motorsport, Fit4Race and MOTAM, and a special thank you this year to my dad; my coach, James “Jiggy” Gornall; my race engineer, Matt Ridout; my chief mechanic, Sam Becketts; and my coach, Kathy Róbert. Without them, this season would not have been possible.’