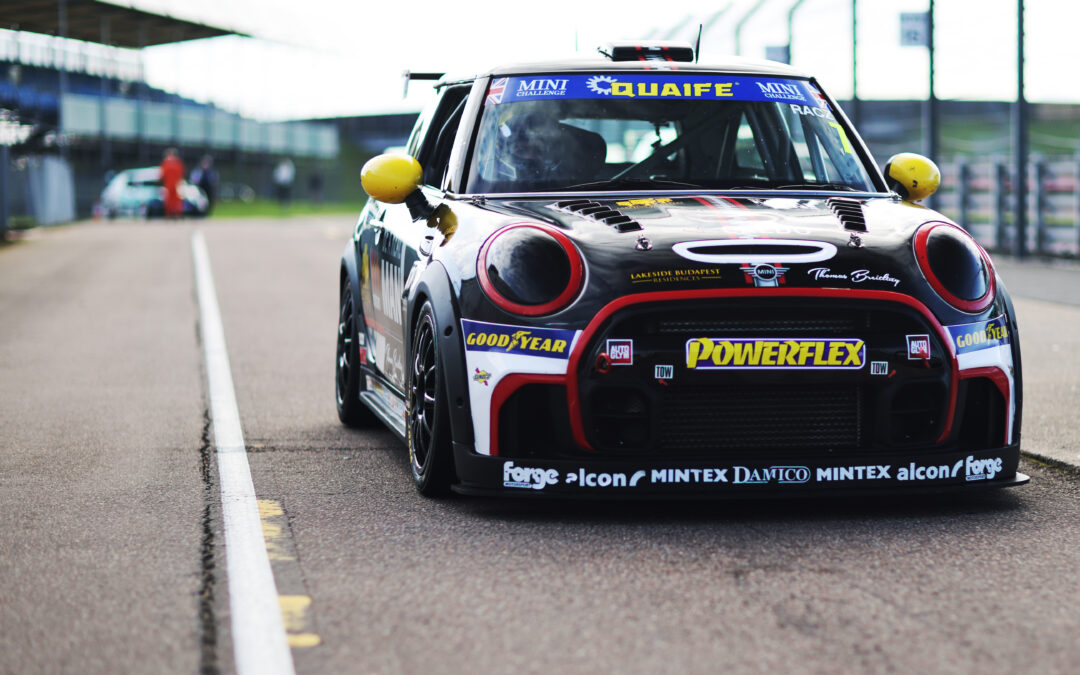 Geri Rácz competed in the MINI CHALLENGE JCW at Silverstone during the weekend. This was the penultimate round of his first season in the series and it didn’t start well, but after a forgettable qualifying session, he managed to make up some ground with a great finish in the top ten in all three races. As a result, he scored more points than ever before and moved up to second place in the rookie standings.

The MINI CHALLENGE JCW season continued at the legendary venue of Silverstone in England with Geri Rácz who raced with the support of HUMDA. The 16 year old driver drove on the 2.6 km National circuit for the first time on the Tuesday test before the race weekend and managed to get to grips with it and despite a poor qualifying session he finished in the top ten in all three races, moved up to second in the rookie standings and at the third race he scored the most points of the rookies whose results count towards this ranking.

Geri set fifth and ninth times in Friday’s free practice sessions gave him reason for optimism for the rest of the weekend, despite the fact that most drivers are not yet aiming for lap times at this time of year.

But Saturday’s qualifying session did not go as Geri and the team had hoped. “We tried a new strategy, which meant that we fitted the car with three new tyres instead of two. This was the first time we had done this, we hadn’t done it before in a test or in free practice and it didn’t work because the car became too stable and understeered, the rear end hoo much grip in the right-hand corners, so my cornering speed and acceleration were not good enough. At the end of qualifying I went out with a new left front tyre and managed to move up three places, but it still wasn’t a good result.” 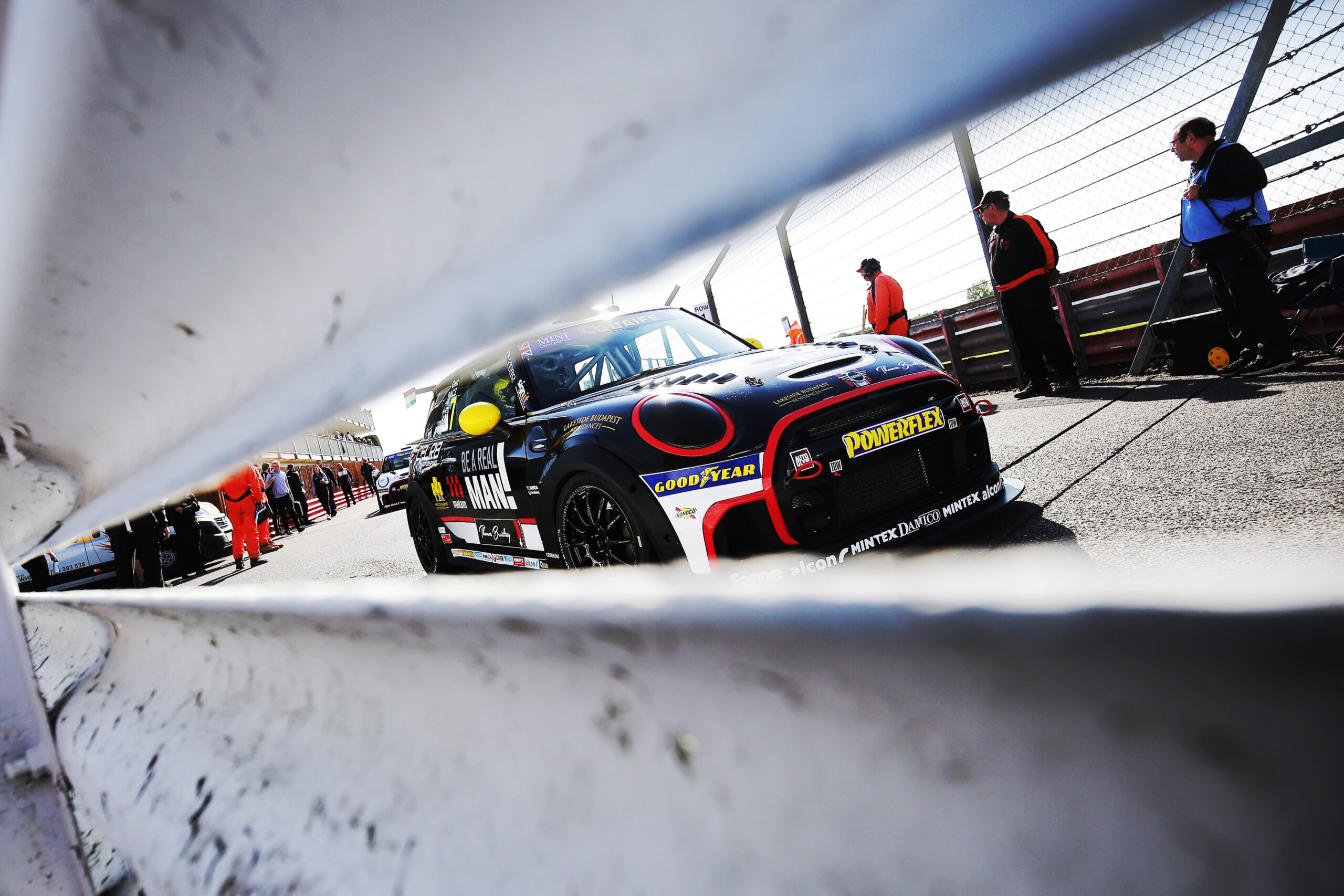 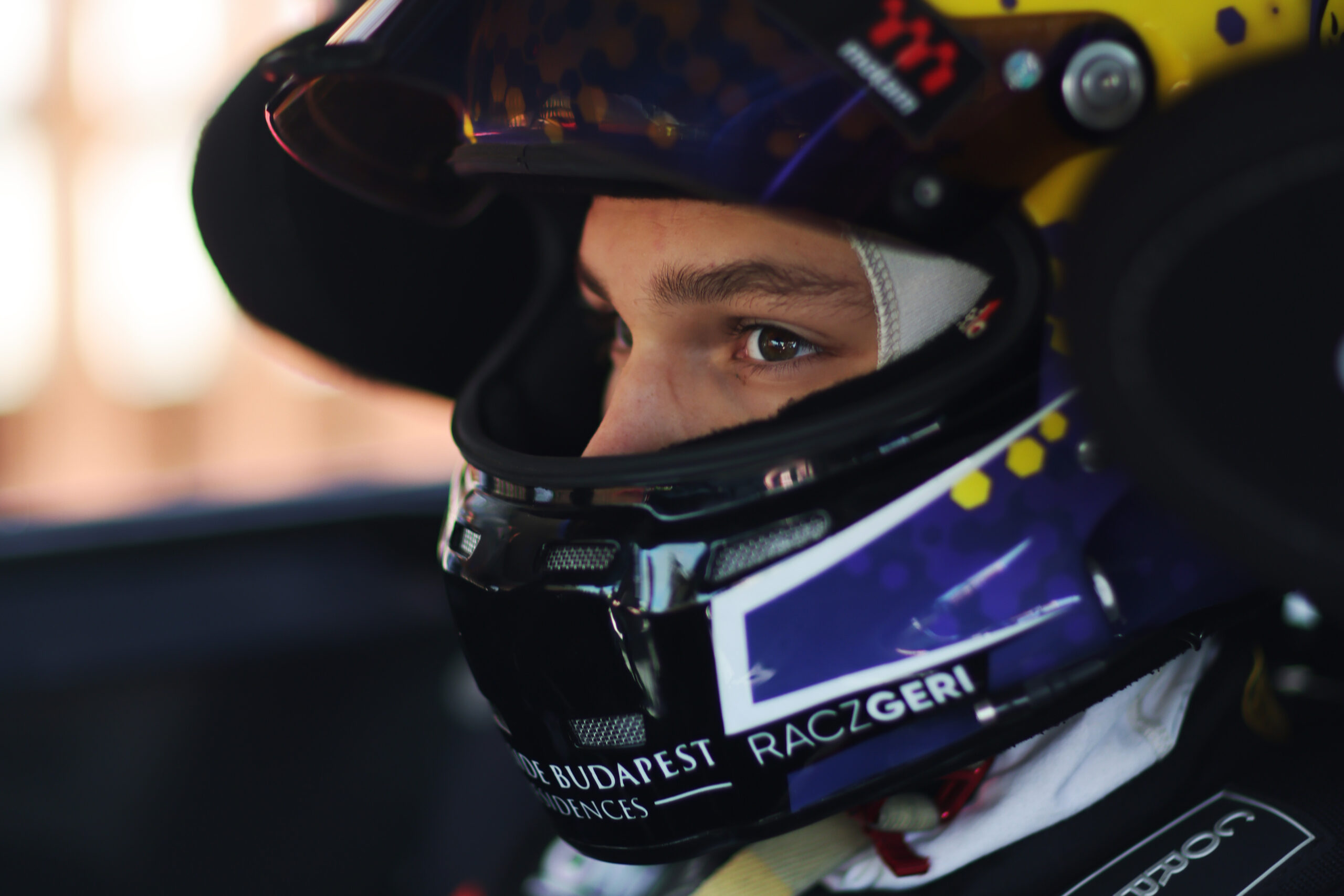 Instantly in the top ten

Geri took 15th on the grid in the 28-car field for the first race, which he started with the aim of getting as far forward as possible while running a clean race. This time he only had new tyres on the front axle, a return to the tried and tested method. In the end, he positioned his car so well after the start that he was in the top ten by the end of the first lap and finished the race in 8th place.

However, he was ranked 9th in the official classification because he was penalised 1.2 seconds for an unforced error, so the stewards eventually reversed the rankings between him and Jack Davidson, who had originally finished 9th. “It’s part of motorsport, I wasn’t disappointed about it, and I approached the second race with the intention of getting back this lost position,” said Geri, acknowledging the penalty.

The Hungarian driver of EXCELR8 Motorsport followed through with this plan, passing Davidson right after the start of the second race and finishing in 8th place in what was, from his point of view, a very uneventful race. 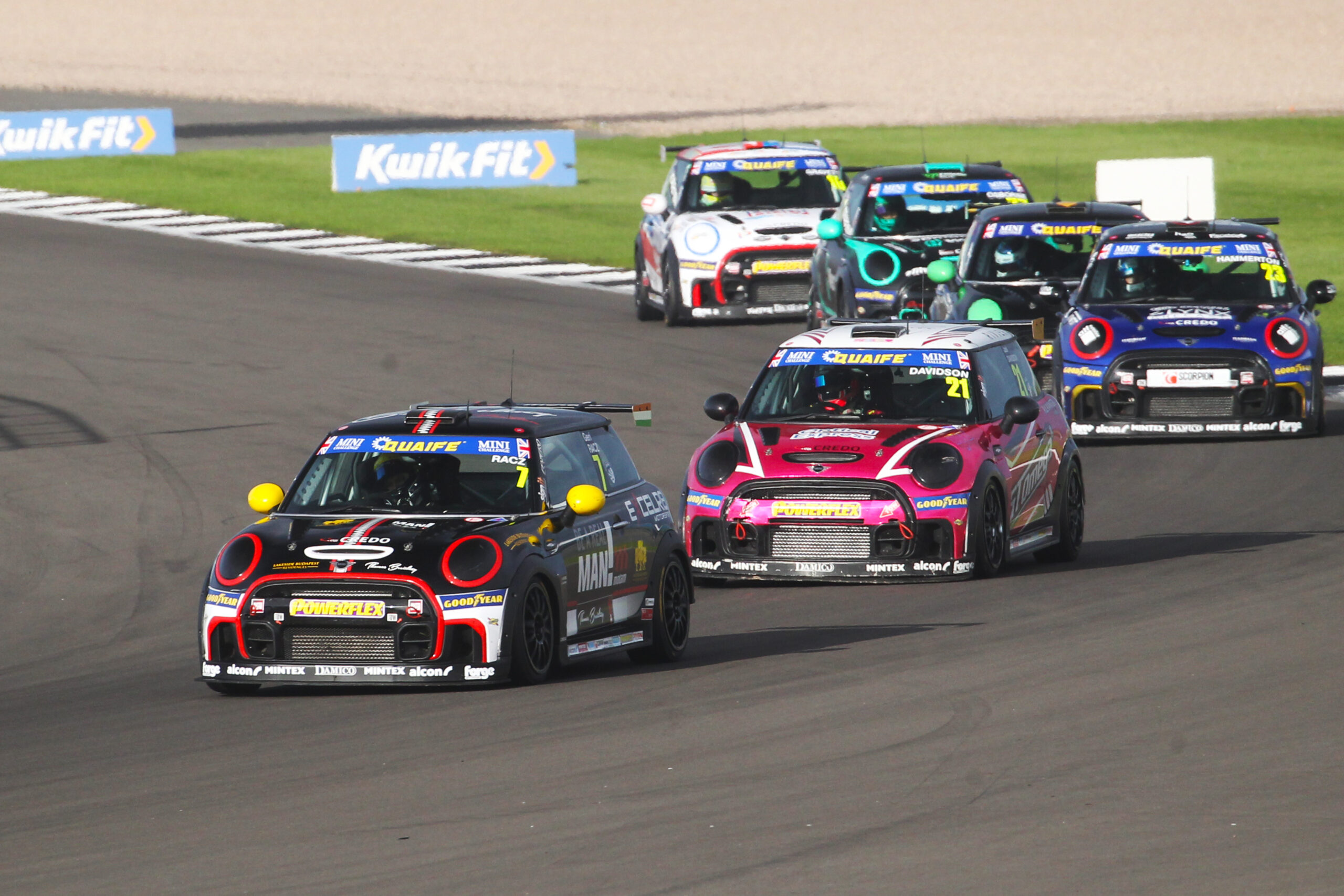 He has never battled so much

After the relative calm of the second race, the third and final race of the weekend has nothing to do with calmness. Geri started from 8th place and ended up seventh, passing back and forth with several rivals for most of the race. This result also meant that the 16-year-old Hungarian was the highest scoring rookie, as he finished top of the rookie rankings.

“It took me two races to experience where and how to overtake on this track. I think it was my most intense race in this series so far, battling from the first corner to the last. I was in contact with my rivals several times and at the end I finished with a photo finish because I was only 6 milliseconds ahead of the eighth place finisher. On the final lap I was watching the screen to see which of us was ranked seventh and I was delighted to see my name in in front.” 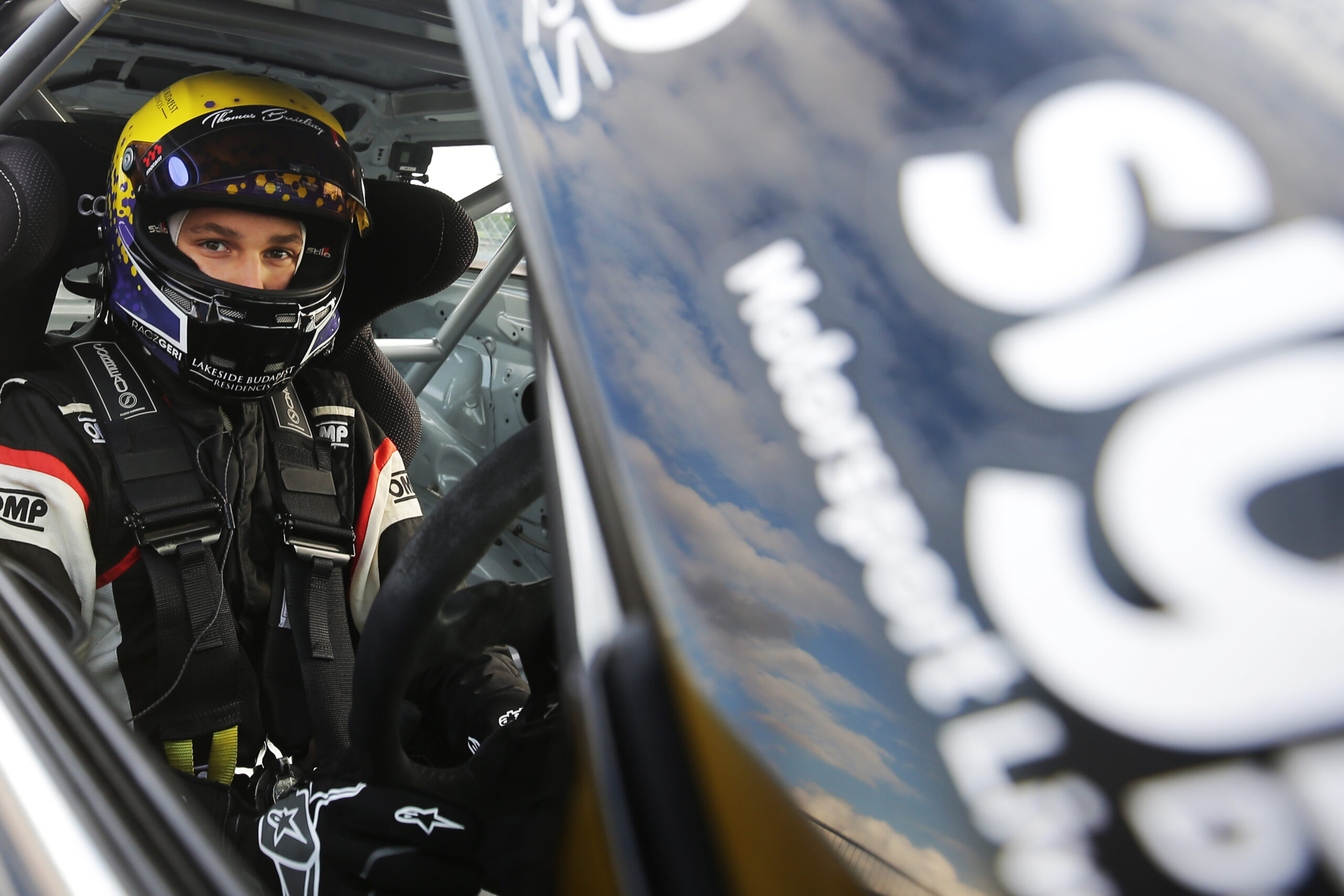 “We always talk to the team about how everyone will start flying in third race because you no longer have to consider that a mistake or accident will have consequences for the rest of the weekend. Especially those who haven’t had a retirement yet in the season will be more agressive, because at the end of the year the results of the two weakest races are eliminated and there’s not much left. Also, a lot of people put two new tyres on the front axle, but I only had one new tyre left, so I suffered a bit in the left-hand corners, while the new tyres had the advantage at the start and held up better until the end.”

Geri’s tally for the weekend at Silverstone is 9th, 8th and 7th in that order, so it’s fair to say that he’s made steady progress. “Overall, I left Silverstone with a positive feeling because I was able to show that I was well inside the top ten in terms of race pace. I hope the same will be true at Brands Hatch, but before I start preparing for the final race weekend of the season, I would like to take this opportunity to thank my dad, Fit4Race and the two winners of the Thomas Breitling prize draw who also watched the Silverstone weekend from the same location. Thank you for your support and I hope they had a great time.”

Geri’s better than ever points haul has moved him ahead of teammate Joshua Jackson into second place in the rookie rankings and 12th in the overall standings. The MINI CHALLENGE JCW will conclude the season at Brands Hatch from 7-9 October, but unlike this year’s second round this time it will use the full track rather than the shorter Indy circuit.