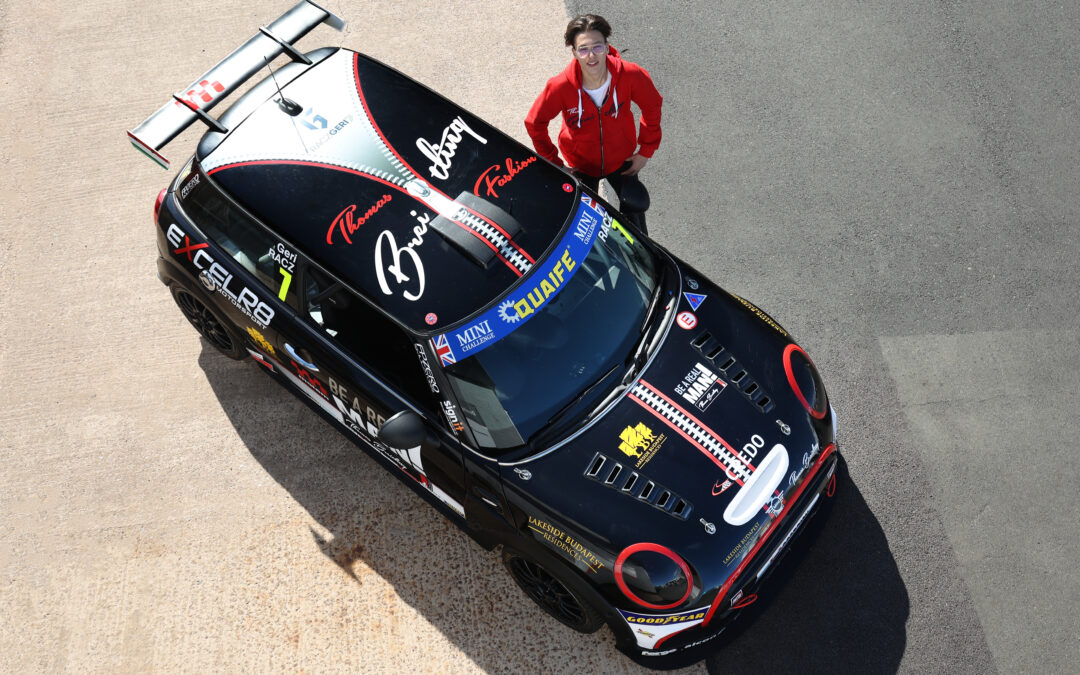 Geri Rácz’s debut season in the British MINI CHALLENGE continues on 14 and 15 May. The EXCELR8 Motorsport driver will take to the track at Brands Hatch, a venue with a rich history and regarded by drivers and fans alike as one of the jewels of Britain.

The MINI CHALLENGE JCW 2022 season continues at one of the most loved racing circuits in England with Geri Rácz in the field. The 16-year-old Hungarian is coming off a promising debut, having picked up the pace in the final race of the season-opening weekend to such an extent that he fought a battle with the best in the rookie classification.

Geri’s pace and attitude has earned him the praise of his team, EXCELR8 Motorsport, and Tamás Őry, the manager of Motorsport Talent Management, the company that guides his career. Geri will be looking to be competitive from the first minute of the weekend at Brands Hatch. 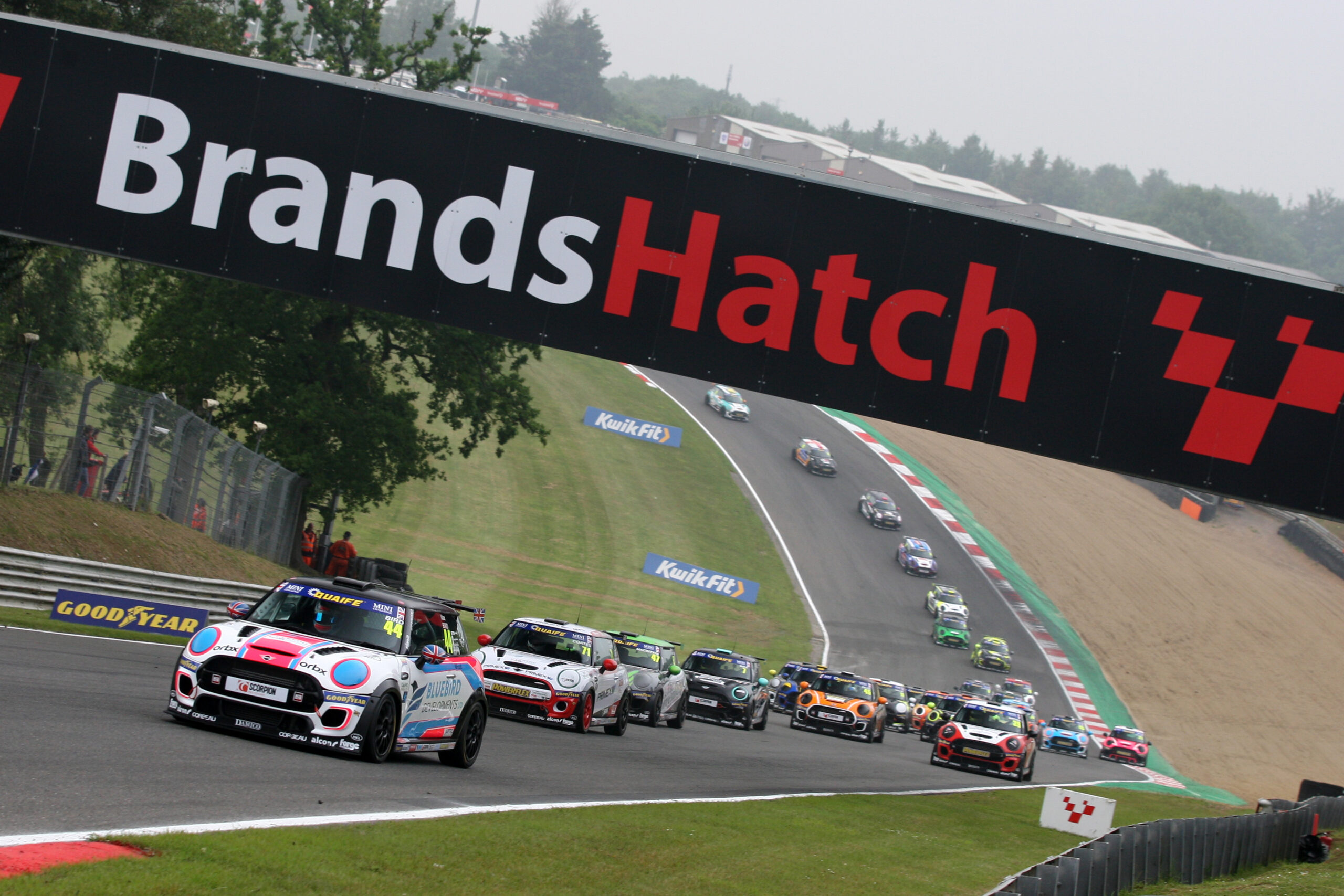 Despite the changes, it remained a true classic

Brands Hatch, not far from London in County Kent, is a place that has captured the hearts of Formula One, touring car racing and even IndyCar enthusiasts, having hosted these three series alongside many others on numerous occasions in its history since the 1940s.

Before it became one of the world’s best-known racing venues, it began life as a grass circuit for motor bikes, which attracted the then 15-year-old Bernie Ecclestone. The businessman, who later became the supremo of Formula One, took part in his first motor race at the circuit and later, in 1949, he unsuccessfully attempted to buy the venue.

In 1950 Brands Hatch has been paved (Ecclestone was also in the field for the first race on the new circuit, but now on four wheels) and after the Second World War it became Britain’s first purposed built track, which at the time was still run anti-clockwise. The first version of the tarmac circuit was shorter than the Indy circuit used by the BTCC (British Touring Car Championship) and therefore by the MINI CHALLENGE field this weekend. The longer version, which forms the basis of today’s Grand Prix circuit, was completed in two stages by 1960. 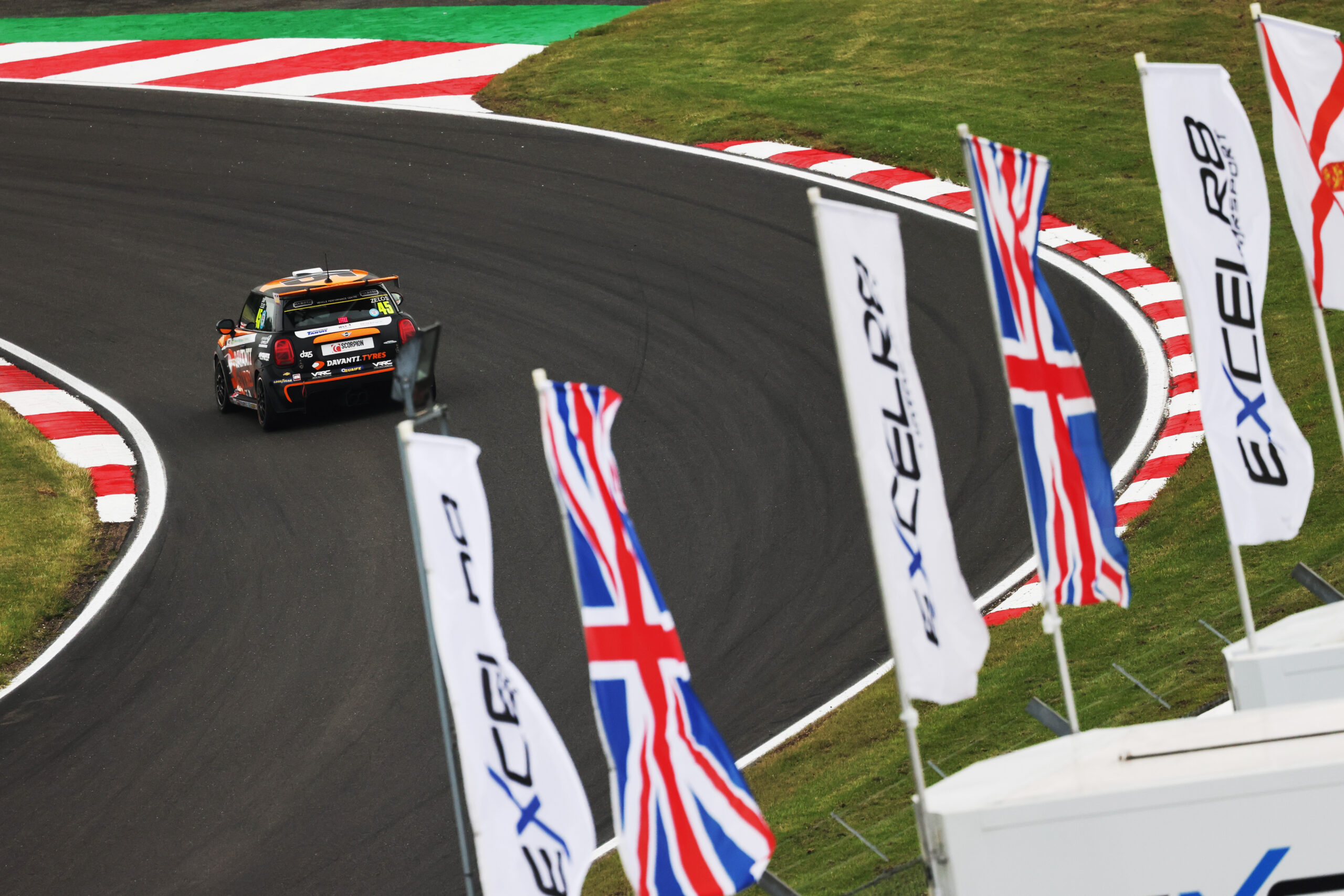 The current shorter track, which hosted the British Grand Prix 12 times between 1964 and 1986, is just 1944 metres long, but still includes famous bends such as Paddock Hill Bend, Druids, Graham Hill Bend and Clark Curve. Most of them have been around in some form for 80 years and can be seen from anywhere in the spectator area, giving the drivers a real stadium atmosphere.

The weekend ahead is sure to be a highlight for fans, with the BTCC field and its support races being one of the the three big events int the circuit’s calendar alongside the British Superbike Championship and British GT Championship.

Already has experience in Brands Hatch

At the pre-season test on the 2km lap, Geri had already got a taste of the circuit and realized that despite the few corners (seven on paper but only five in practice) it is not easy to put together a good lap on the Indy layout.

“At first I felt very strange because of the new car, but it was an exciting and good experience. I like the track very much. It’s short and fast, with fast corners that you have to hit very well, requiring a high level of precision. There are not many corners but that doesn’t make the lap boring at all. In addition, as at Donington, the atmosphere is probably going to be great. I’m really looking forward to racing in front of lots of spectators again,” said the Hungarian EXCELR8 Motorsport driver, looking ahead to the second weekend of the season. 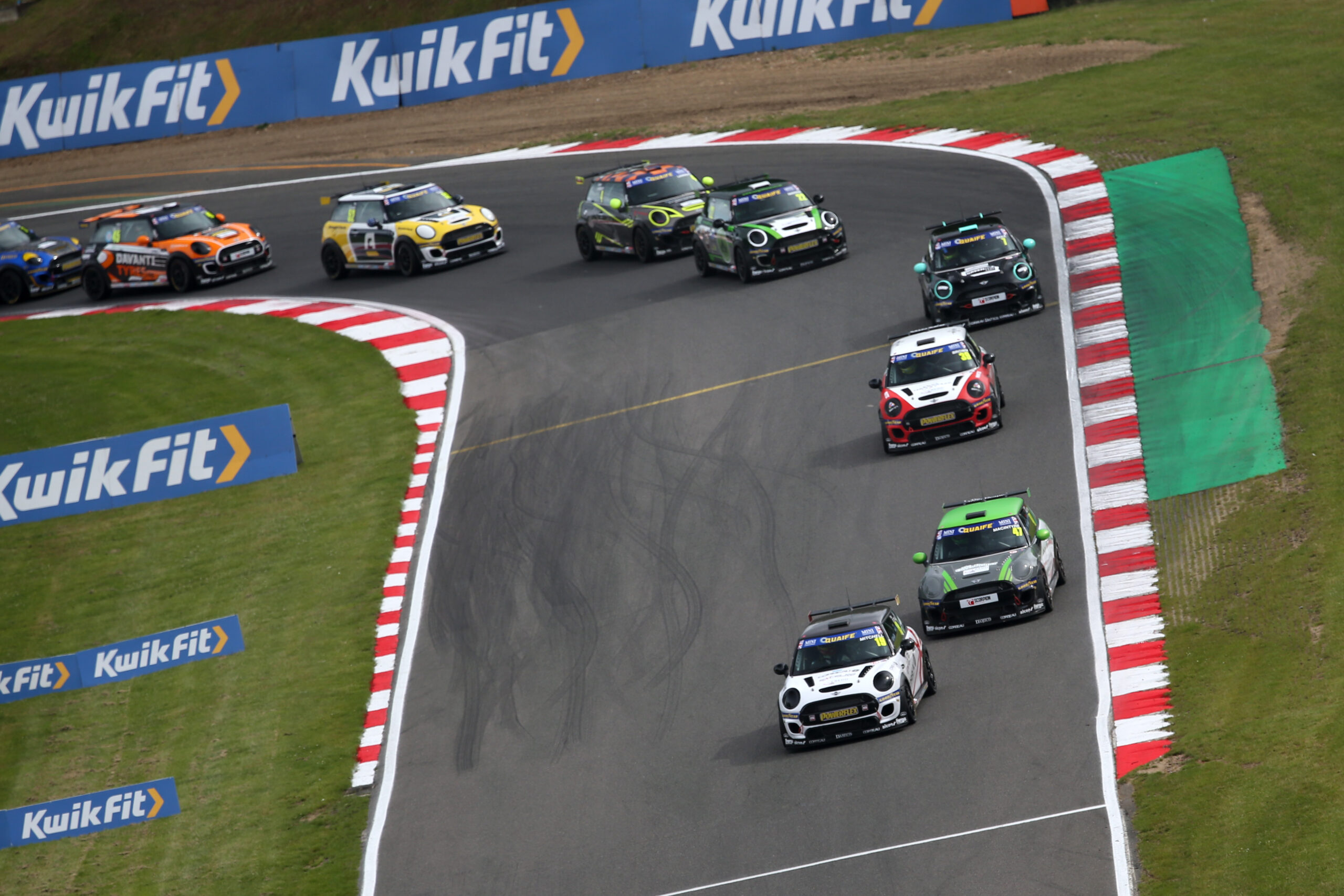 With two races of experience under his belt, Geri has set himself a number of goals for the first round at Brands Hatch (which will be the venue for one more visit later in the championship), where he will race once on Saturday and twice on Sunday.

“I learnt a lot of things on my first race weekend. One is that you have to start well, because if you don’t, you lose a lot of positions, and the first lap is where you can gain the most places. If you don’t get a good start, you lose that opportunity and it’s much harder to get ahead later in the race. What I also need to focus on is getting the tyres properly warmed up to be competitive from the first metres.”

The latter will be helped by the fact that, due to the shortness of the track, the drivers will have to do two warm-up laps before the current races. However, they will have to start by doing well in qualifying, which will decide the grid order for the first races. This will be a unique challenge, as the field of almost 30 drivers will be very compressed on the short circuit.

“It will be difficult to get a clean lap in qualifying. It’s important to get out on track at the right time, with as little traffic as possible, and then, on that particular lap, you’ll have to set a good time. If there are a lot of people out on the circuit all the time, it will give me a chance to practice a bit for the race,” said Geri, who is aiming to keep improving and finish in the top of the rookie classification this weekend. 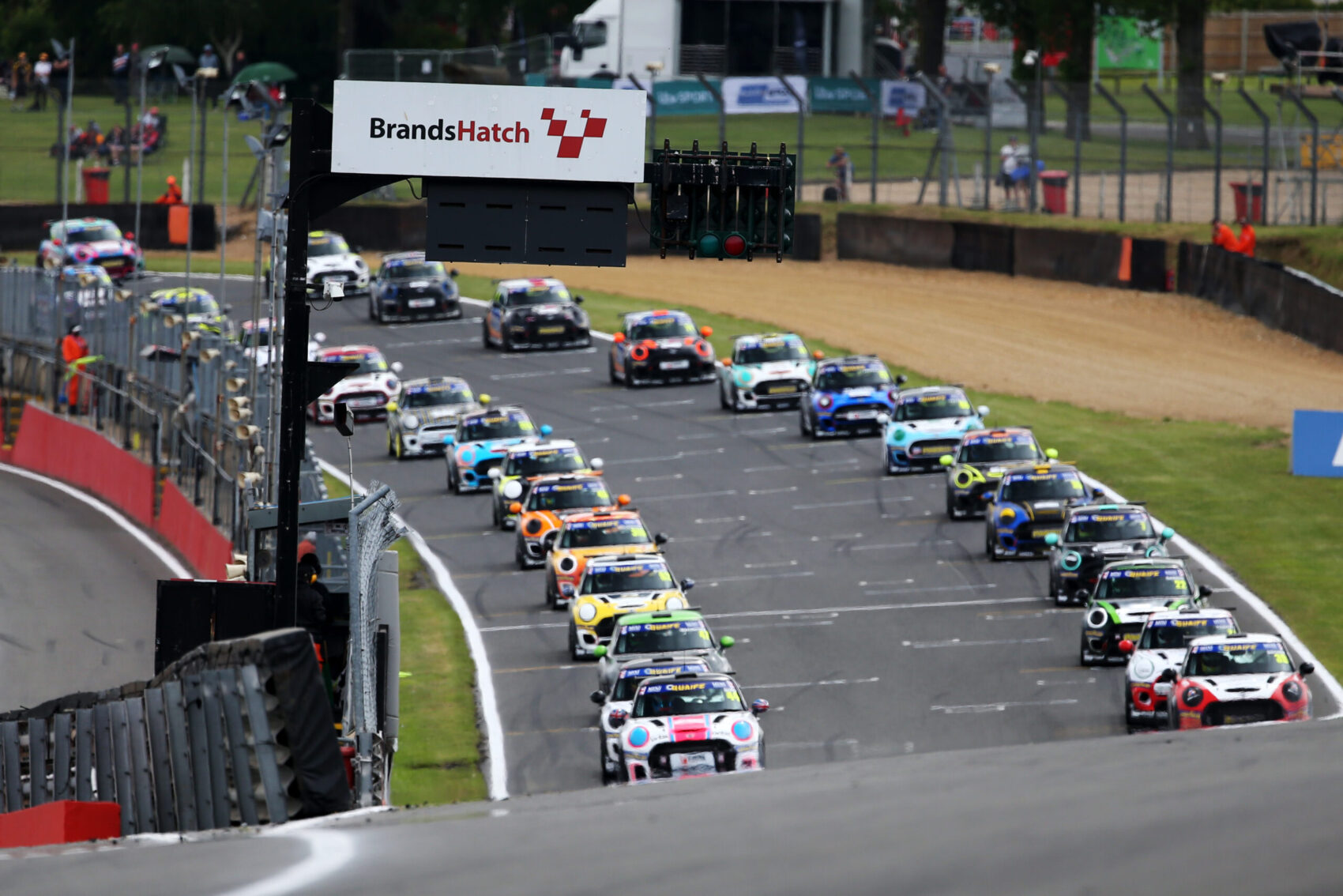 Although he hasn’t been in a real race car since the weekend in Donington, Geri has had a busy three weeks between the two rounds.

He made his debut as a commentator on Sport TV, where he will be joined by András Petur to bring viewers closer to the world of MINI CHALLENGE after each race weekend. The recap of the second round is scheduled to air on Sport 1 on 25 May at 21:30.

The short break between the races also gave Geri the opportunity to meet his MOTAM teammate, Martin Molnár, who competes in the top class of karting, and to take part in a team-building bowling session.

As for the #7 MINI, Geri’s 270 horsepower car was also on hand as the team invited students from University Technical College Norfolk for a career day, during which they were able to get an insight into the every day life of EXCELR8 Motorsport, try out the simulator and practice changing tyres on Geri’s car.