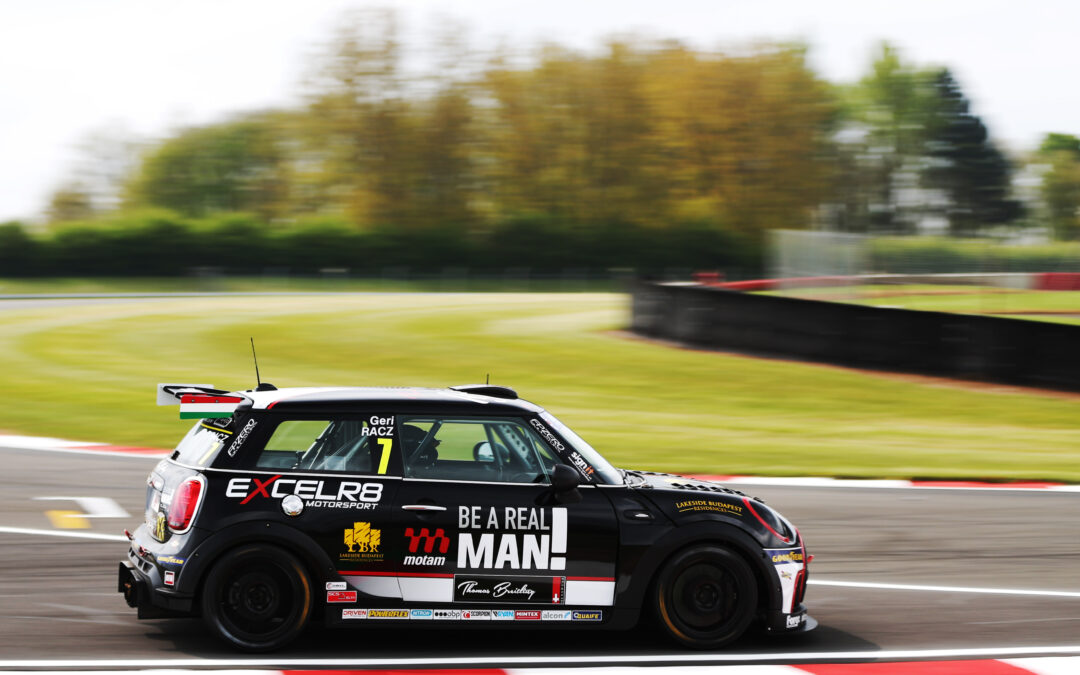 Geri Rácz has come a long way in the first UK race weekend of his career at Donington Park. The MINI CHALLENGE field presented the 16-year-old EXCELR8 Motorsport driver with a big challenge, but after some initial difficulties he showed he has a place in the series by making a great recovery, improving eight positions in race two and nine in race three, and also fighting for the rookie classification.

After one retirement, Geri Rácz’s first weekend in the British MINI CHALLENGE produced two spectacular races. The 16 year old will continue his career in the United Kingdom with EXCELR8 Motorsport from this year with the aim of becoming a top touring car racer. The first races immediately showed that the 270 hp cars with sequential gearboxes and slick tyres, and the harsh tracks with gravel and grass run-offs and experienced opponents are a real challenge.

The first serious test was Saturday morning qualifying for Geri. He started with a promising pace and in the first part of qualifying he was fighting around 9th-10th places, but a red flag broke his momentum and after the restart he was unable to improve his lap time, finishing 17th in a field of 28. He was not at all dissatisfied with this, as he was just over half a second behind Jason Lockwood who set the fastest time of the six EXCELR8 Motorsport drivers and took 9th on the grid. It was an encouraging performance in his first qualifying session in the MINI CHALLENGE. 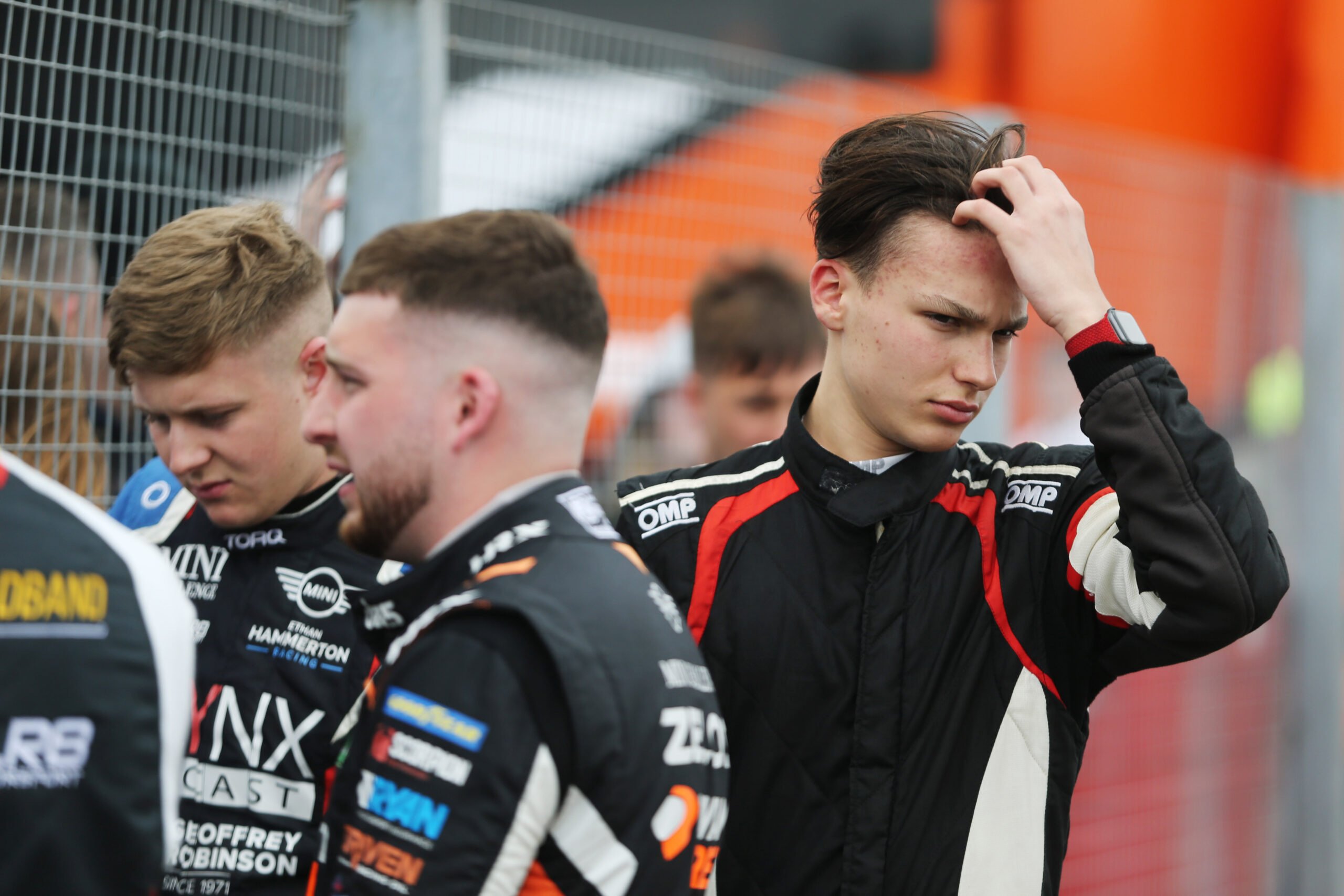 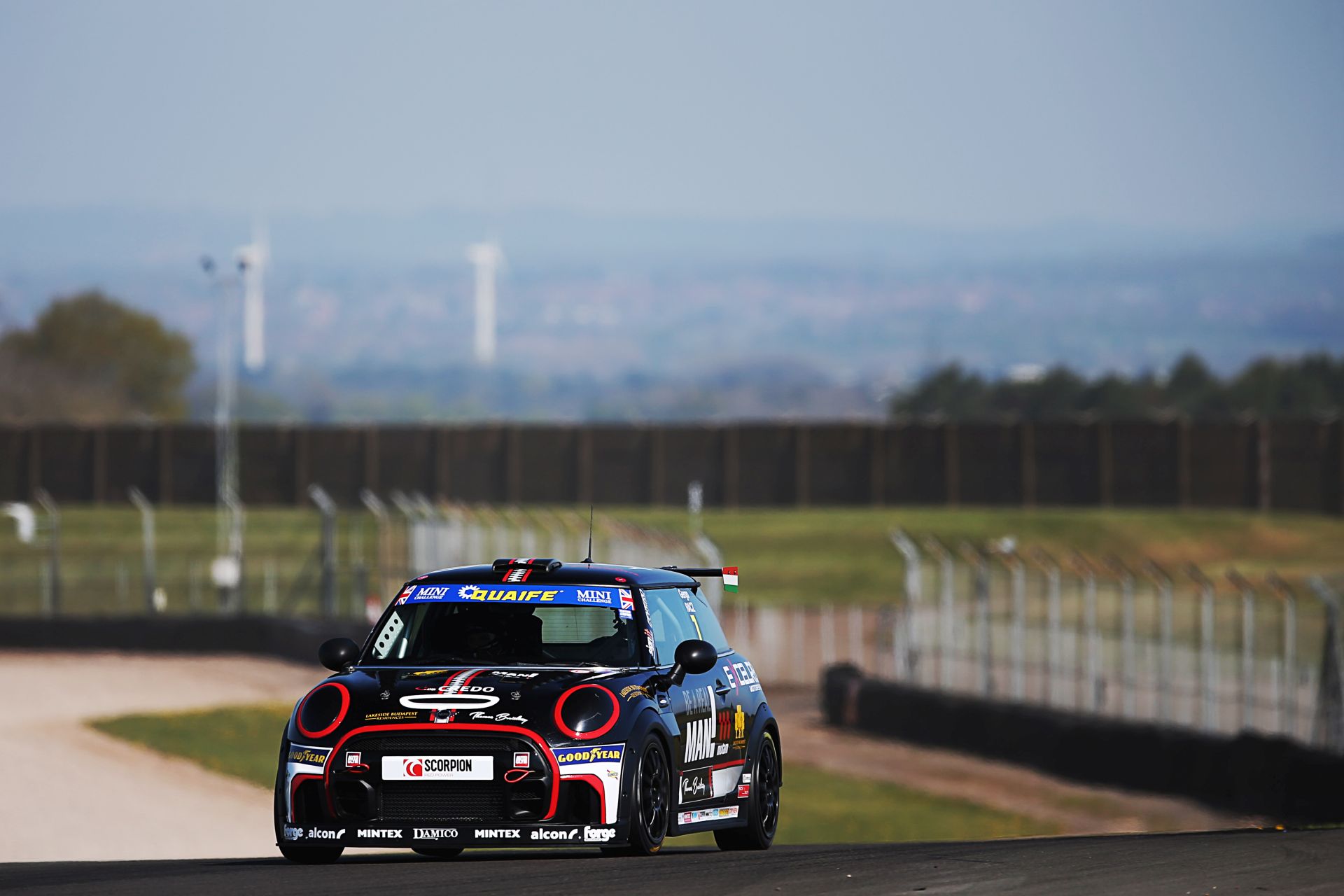 At the start of the first race, also held on Saturday, the #7 MINI driver looked set to continue to prove himself. After starting from 16th position due to a penalty for an opponent, he made a great start and immediately improved three places, but was eliminated due to an accident.

“Two of my opponents collided in front of me. I had no choice but to slam on the brakes and the rear of the car got away on the cold tires. I couldn’t catch it, so my race ended in the gravel trap,” he said on Saturday, but tried to look on the bright side. – The glass is more like half full, because I got off to a good start, which the team specifically highlighted, saying that it’s more typical that a driver can get off to such a good start after a season of practice. Of course, I still have room for improvement, but it wasn’t bad for a first start.”

A better than expected catch-up on Sunday

Geri started the first of the two races on Sunday in 28th position and finished in 20th place, eight places better than expected. He could have done one place better, but the fight was ended by a red flag and the last full lap was taken into account. 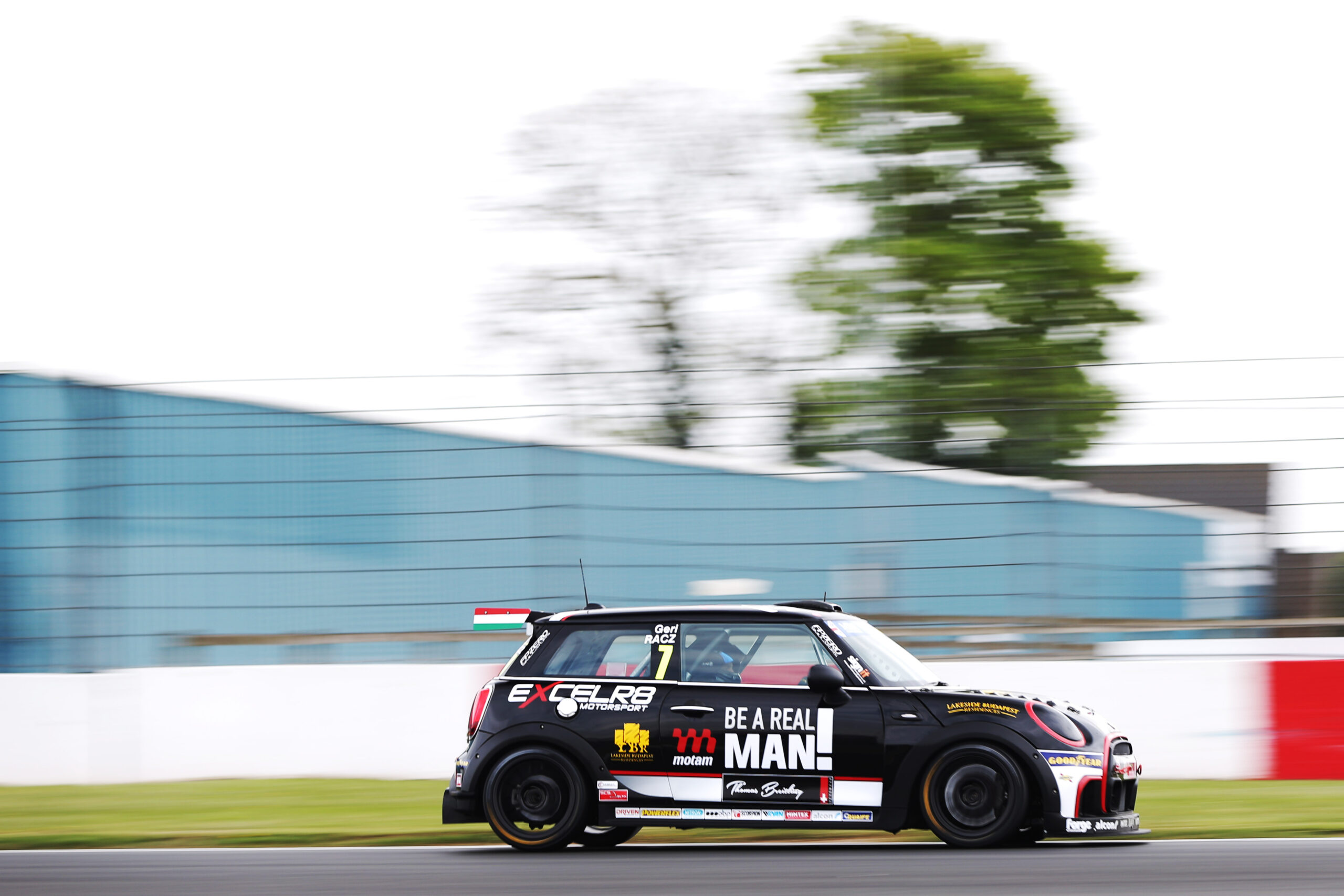 In the second and third race of the day, he started from 20th on the grid, but moved up to 15th position on the first lap and later gained places. At one stage of the race he was 9th and was eventually flagged off in 11th place, gaining a total of nine positions in the 20-minute race. He took the chequered flag just behind Alex Denning, who won the rookie classification, after a battle between the two on the final lap.

“I had really good battles. I didn’t come out of one of the duels well because two of the guys in front of me crashed, which slowed them down quite a bit, but I was able to pass one of them. But then another rival came from behind and cut me through the gravel and I couldn’t get around him and hit him a bit, which caused three of them to pass me,” said Geri, assessing the final race of the weekend.

Geri is 21st in the overall points standings after the first weekend with 39 points. He is 5th in the rookie standings, but the rules require all riders to drop their two worst results at the end of the season. After a slip in the first one, the young driver was competitive in the second and third race, earning the team’s praise. Geri can rely on EXCELR8 Motorsport’s engineers, mechanics and drivers, as well as his experienced coach James “Jiggy” Gornall who assisted him during the tests. 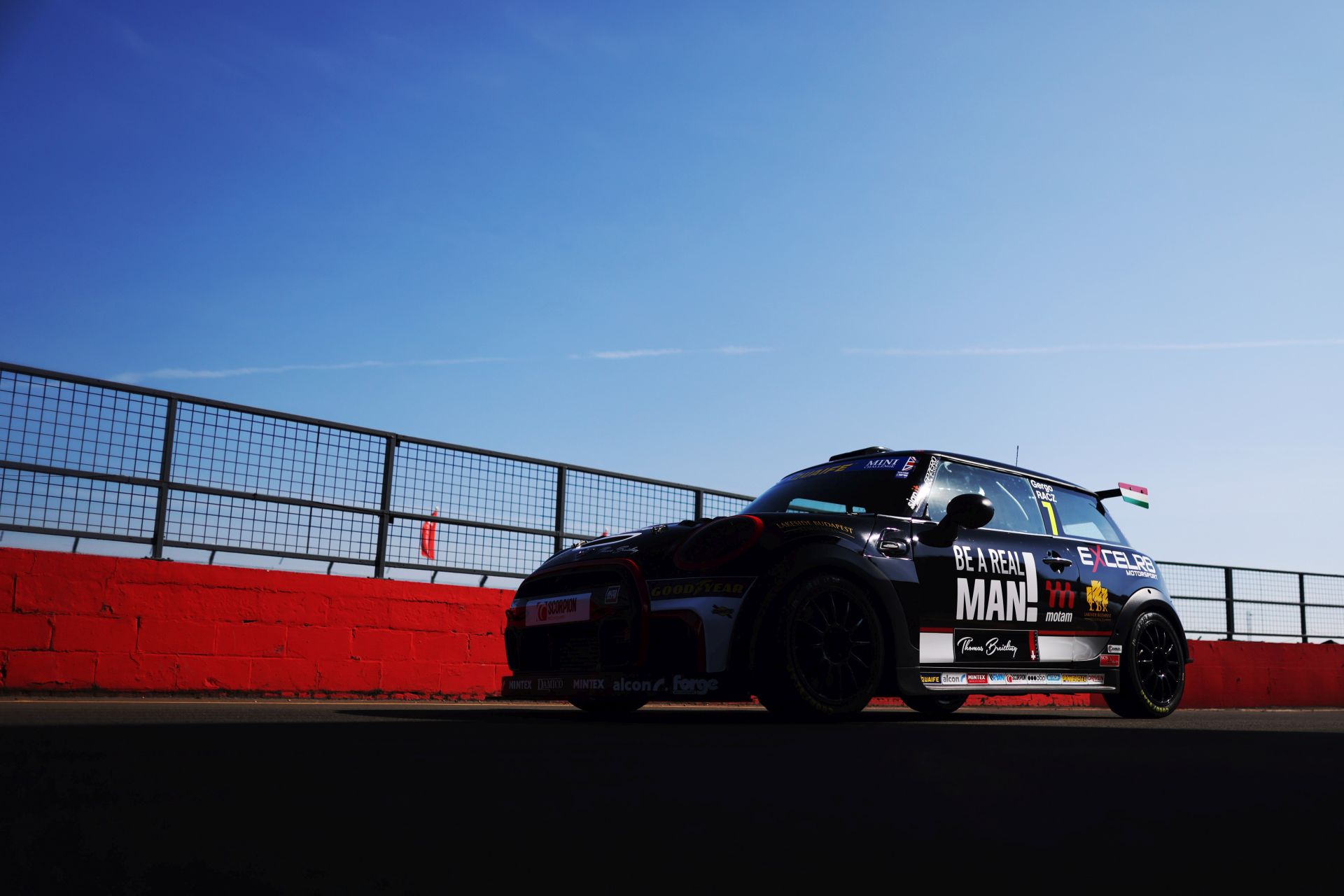 “We are trying to build a very close relationship with the team and share as much information as possible. Data analysis also helps a lot, we compare the telemetry of the teams drivers, so everyone knows where and what they need to improve. I would like to thank Dan Zelos for all his help throughout the weekend, I could ask him anything and he came to me himself to see if he could help me with anything else. I’m grateful to the whole team for the weekend and to Fit4Race for playing a key role in my preparation. I really enjoyed both races on Sunday, but especially the second one. There was so much action I can’t even remember all of it. Congratulations to my teammates on the results!” – Geri summed up her debut weekend.

The EXCELR8 Motorsport driver will next take to the track at Brands Hatch Indy from 13-15 May.