Martin Molnár takes it to the next level, competing in a stronger and faster karting class 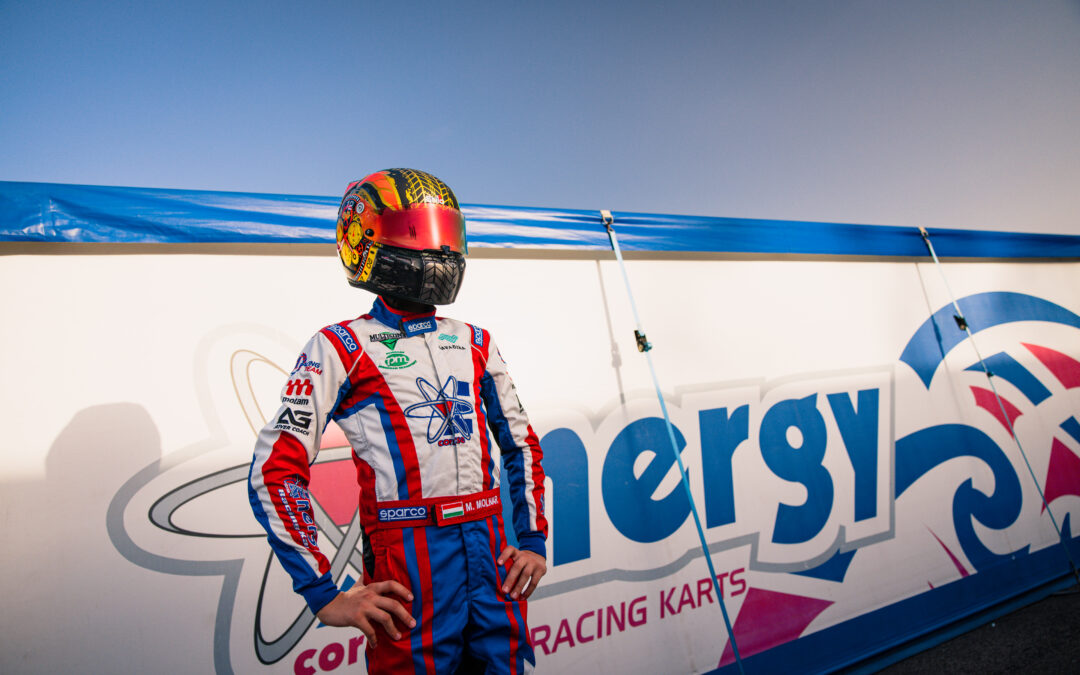 After having retired from the OK Junior category in October, Martin Molnár will make his debut in the OK field this weekend. The 14-year-old Energy Corse kart racer will compete with the bests in Sarno.

Martin Molnár, who finished a great season in the OK Junior category, will take another step in his karting career this weekend, as he will make his debut in the OK category in the first round of the WSK Final Cup. The Energy Corse factory driver finished 3rd in the Champions of the Future Euro Series in Franciacorta this year, second in the Trofeo delle Industrie and has been among the front runners throughout the World Championship, winning a qualifying heat and finishing second in the Super Qualifying heat.

The HUMDA-supported athlete is competing for the first time in Sarno, in an OK field that is in every way higher than OK Junior, not far from Naples. In terms of technical comparison, the go-kart used in OK is stronger, faster and has better grip in the corners. There is a power difference of about 10 hp between the two classes and the OK has a higher engine speed of 2000 rpm. In addition, the teams use a softer tyre compound and there is a power valve on the karts, which have a weight limit of 145 kg compared to 140 kg in the juniors. This allows lap times to be improved by 1-1.5 seconds depending on the track, and speeds can be increased by up to 15 km/h on straights.

Change in the procedure

This will be the 11th time in the history of the WSK Final Cup since 2011 that the prestigious season-closing event will be held (it was cancelled in 2020 due to the Covid epidemic), but for the first time the combined results of two weekends will decide the championship title, as the future promises will clash in Lonato from 10 to 13 November, following the event in Sarno from 3 to 6 November.

More than 200 karters are expected to compete in all four categories at the opening round in Sarno and, like Martin, many will be making their debut in the higher class. The OK field will include Tony Kart’s WSK Super Master Series winner Joseph Turney and his team mate Jan Przyrowski, who has moved up from OK Junior after winning this year’s WSK Euro Series, not to mention WSK Open Cup winner Tomass Stolcermanis, who will be racing for Energy Corse as Martin’s teammate.

Racers can achieve this

With a good performance here, the youngsters could follow in the footsteps of predecessors who are not old either, such as Callum Ilott (23), who won a silver medal in Formula 2 in 2020 and currently races in IndyCar, or Frederik Vesti (20), who made his debut in F2 this year and will be able to test with Mercedes after the Abu Dhabi Grand Prix in November. Also competing here was last year’s F2 silver medallist Robert Svarcman, who drove the Ferrari in the first free practice session at this year’s US Grand Prix and will get another chance in Carlos Sainz’s car in Abu Dhabi. In addition, all three won the WSK Final Cup.Azt a Final Cupot, amelynek vasárnapi napját a WSK oldalán szokás szerint bárki élőben követheti majd, és szurkolhat Molnár Martinnak, illetve a másik három magyar versenyzőnek.

Programme for Round 1 of the WSK Final Cup